Geeks are nerds with girlfriends 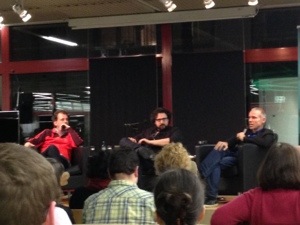 On Friday the 15th, I spent an amazing evening at Cologne. The Stadtbibliothek Köln hosted the event „Geeks in Education“. The first speaker was Eli Neiburger, tech manager at Ann Arbor District Library. His journey to (and through) Germany had been organised by Zukunftswerkstatt e.V. and funded by the US-american embassy. Second was André Spang whom his pupils call „the iPad teacher“ – a teacher at Kaiserin-Augusta-Schule Köln – who has managed to work entirely without paper (and mostly without a blackboard, I think) for two years!

I knew of this event because Christoph Deeg, who has been my first tweetup a couple years ago, organized it and tweeted about it. I already know to trust in Christoph’s good taste – the last time he travelled through Germany with a librarian from the US, I got to spend an afternoon with the amazing Michael Stephens. We talked geek for a couple hours and it worked like a recharge for my enthusiasm about all things Web 2.0. Afterwards, I read some of the books he recommended and spotted a glitch in my dissertation (which luckily is still in a state where such things can be fixed).

So I left the office early on Friday, got on the train to Cologne and arrived there just in time for Eli Neiburger’s presentation. He talked about gamers in the library and cut right through to some of the (uncomfortable?) truths about the changing role of learning, education and cultural institutions in the 21st century. I’m not going to give a play-by-play account here. If you’d like that, please search for the #edugeeks-Hashtag on Twitter or watch the video the Zukunftswerkstatt will upload to Vimeo (I’ll add the link once it exists).

After Eli had finished, I was afraid André Spang was going to have a hard time trying to pull even. I needn’t have feared. He gave insights into his iPad-based teaching and told us about project his students had completed. I was amazed, and I think we all were. What I liked best was the way he uses wikis. I’m not going to elaborate on this one either because you can visit the wiki he created for the „Geeks in Education“-Event or just watch his Prezi right here:

After a short break, it was time for the grand finale: a discussion with both the speakers and Christoph as moderator. There were a few of the usual questions and some really fascinating ones. I had one of my own, but it didn’t seem to fit into the flow, and I would have needed to make a detour for it to make sense, so I decided to postpone that and use this blogpost to elaborate. Listening to Eli Neiburger and André Spang and thinking back about the conversation with Michael, I thought that there is another „transitional problem“ we didn’t really talk about.

We established that gaming as well as working with an iPad enables new forms of learning. Both of them encourage autodidacticism – while video games introduce us to complex systems in which we get to acquire the necessary knowledge and skills as we play, devices like the iPad enable us to mess around with formats which weren’t as accessible before. André Spang showed examples of his pupils making films, composing melodies, assembling ebooks and so on.

It seemed pretty clear to all of us that living in the 21st century requires new cultural techniques to evolve (and us to master them). We would probably all have agreed that the children of today need to learn how to deal with the internet, mobile devices, social networks and such from an early age. But, as the human mind has its limits and as the tendency in Germany goes towards shortening the time span one should spend in school, at the university and so on, we can’t just keep adding to the curriculum. I could get started on complex systems and forgetting as a prerequisite for learning, but I won’t. For now let’s just focus on the fact that we need to forget – or to not learn in the first place in order to keep functioning.

So far this is stating the obvious. What it doesn’t yet explain is the anxiety we experience when confronted with new things. Most people who react badly are not specifically against gaming, social media, mobile devices, the new phenomenon in general. But they are afraid of what you’ll want them to sacrifice for it, afraid of what you won’t teach their children. Mastership of certain cultural techniques has always been one of the main factors that determine the value an individual has for society. Consequently, these techniques got to be perceived as values in their own right, and now parents feel that the values they were taught aren’t respected any more. This may seem trivial, but it runs deep.

Last time I discussed iPads in the classroom, the most important and most emotionally challenging argument against it seemed to be that the pupils „wouldn’t acquire a proper handwriting“ (the ability to read and write properly being one of these techniques that are perceived as values in their own right). I am aware that there is not a single class anywhere that gets taught with the iPad only, but even if it were the case, let’s raise the question. What if they don’t have a proper handwriting? They’ll have a smartphone, a tablet or any kind of device with them where we were taught to bring a pen. (I still like using my really outdated fountain pen, and I don’t intend to throw it away. But I realize that occasions for using it came from being the norm to being the exception, and I can’t really get worked up about it.)

There are zillions of examples of this shift – they don’t read paperbacks but ebooks, they don’t use a dictionary but Google or Wikipedia, … – you name it. Eli Neiburger stated that while the book might not live on, the written word would. This conciliatory statement triggered a collective sigh of relief in the audience, and quite a few people felt the need to tweet this a.s.a.p. Up to this day, we accepted that one technique be replaced by another. To stick with the example of writing, a letter didn’t need to be written with a fountain pen any more, it was also okay to use a ballpen. Then it became acceptable to use a writing machine, the computer (as long as there was a signature!), email (now even without signature), SMS… But these are baby steps, and this is still the kind of mindset that makes us exclaim, “But there will still be people coming to the library to read books!”

Now we finally get to the question I would have liked to ask: If it’s true that cultural techniques are evolving and that we need to not perceive them as values in their own right anymore, would you agree that we should get to substituting all these values by a new one: the ability and competency to identify and learn the techniques needed by a certain individual at a certain point in time? And how do cultural institutions manage that shift?

In the course of history, they came to believe that they know what their audiences should know or care about. Just like parents feel about their children. But those audiences (as well as those children) live in a changing world. Most of the time, they deal with it by themselves. When they actually are overwhelmed with the magnitude of possibilities and information, they might turn to their institution looking for guidance. But more often than not, the offer they are hoping for does not (yet) exist. And it is not okay to tell them to just pick something else from the program because it has been carefully curated and is good for them. They don’t want a museum guide, a librarian or an archivist to tell them what they should want to know. They want to be taken seriously.

Consequently, what has to change about institutions is the way they engage their publics. They need to get over focusing only on the original object. What they should focus on instead is curating content and making their visitors contributors. Our culture does not need to get poorer for embracing new formats. Because while no individual can learn all there is to learn, master each cultural technique, it can create its own mix. Every one of us should be enabled to choose what he or she wants to learn at which point in our lives. As of today, I only know how to light a candle but I can’t make one. Tomorrow I might feel the need to change that – and I will be able to, because there are people who took the time to write about it, take photos or even videotape the process. If I went searching for that kind of information, I’d turn to Google. Wouldn’t it be awesome if I were directed to the site of my town’s library or a museum I never heard of?